Showing posts from July, 2007
Show all

I needed a few things from the BMW dealer in Grand Junction which at 200 miles is equal closest to me with Salt Lake, but a better ride. I headed out over Sweeper Madness (UT72) to I70 which is really nice ride until Green River but then becomes desert and therefore hot. After taking care of business in Grand Junction I came back on UT128 which follows the Colorado River down to Moab. On the way I found Utah's longest suspension bridge - the Dewey Bridge: Later in the day I ran into some storms but was also treated to some great views For the full story go here
Post a Comment
Read more

Rim Lake lies at the southern end of Boulder Mountain Top at an altitude of 10,853 feet, ever since I first discovered it a couple of years ago I've wanted to hike round it. Two weeks ago I set off to do that but took the wrong road and was then chased off the mountain by a thunderstorm. Since then pretty much every day has been stormy, this morning while sitting listening to the cricket commentary on the internet I noticed that there wasn't a cloud in the sky. I quickly martialed the camera gear, riding gear, hiking gear and some lunch and headed out on the KLR. The KLR is a better bike for this kind of expedition than the CRF, the roads are not technical, it has carrying capacity and is much more comfortable with it's soft seat and saggy suspension. OK, so the lights don't work... I blasted up the hill barely stopping, there were a few clouds forming but nothing threatening. Until I reached the lake, the only place on the whole Aquarias Plateau with a storm was Rim
Post a Comment
Read more

Exploring Sand Creek After The Flood

Following the flash flood during the week I decided to see what had happened further upstream, there is a trail that follows Sand Creek for a ways up into the hills in part to service the pipeline that brings Torrey's water down from the heights of Thousand Lake Mountain. It didn't take long to find the effects of the flood, that's what I call a Rut! But as if on order here comes my personal road builder Continued here
Post a Comment
Read more

July 25th 2007 We have been having heavy thunderstorms every day for the last week with quite a lot of rain falling, on the evening of Tuesday 24th the rain fell particularly heavily for a couple of hours over the canyon between the Anthill and Thousand Lake Mountain (and over Torrey at the same time). This is the catchment area for Sand Creek which flows down from Thousand Lake Mountain then turns east across the north end of Torrey before joining Sulphur Creek and flowing into Capitol Reef NP. The bridge is on Center Street which runs up from the side of the Chuck Wagon to the Sleeping Rainbow area behind Torrey, this road was only just paved last year. Looking west from the bridge, Sand Creek is normally a trickle at this time of year, maybe a couple of feet across and an inch or two deep, even during the snow melt it rarely has more than a foot of water in it. The water went right up over the bridge Continued here
Post a Comment
Read more 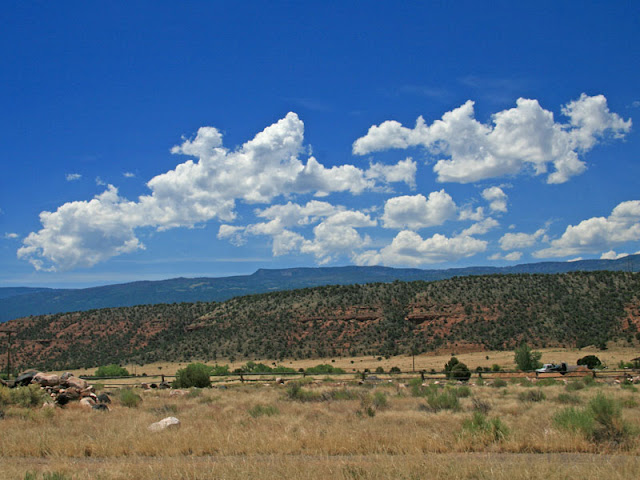 A rather hot spell was followed by a stormy spell up on the mountains but finally on Saturday it looked like the clouds were not going to gather over Boulder Top, well not the black storm clouds I think I'll head up there (this is the southern view from my house) I turned off UT24 just through the gap between Torrey and Bicknell and immediately noticed a sign for an access road to the Great Western Trail, I thought maybe I would find a track leading to the Boulder Top access road. The trail started to climb the spur of Boulder Mountain that forms the southern side of the gap with good views of Bicknell Bottoms Over the top of the spur was a downhill in some deep fine sand, I careened down it and at the bottom decided it was obvious that the trail was going in the wrong direction, then I tried to get back up the slope. No chance, the knobs on my rear tyre are really worn down but I think I would have needed paddles to get up there. I hit it at about 25mph but barely made
Post a Comment
Read more
More posts